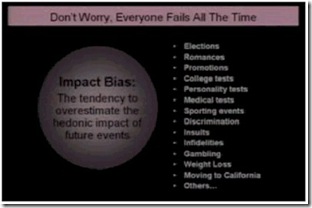 Dan Gilbert’s memorable TED presentation talks about what really makes people happy and not happy with a special note that ‘failure’ has much less impact than everyone expects.

“From field studies to laboratory studies, we see that winning or losing an election, gaining or losing a romantic partner, getting or not getting a promotion, passing or not passing a college test and on and on have far less impact, less intensity and much less duration, than people expect them to have. In fact a recent study – this almost floors me – a recent study showing how major life traumas affect people suggest that if it happened over 3 months ago, with only a few exceptions, it has no impact whatsoever on your happiness.”

· Jim Wright – disgraced congressman who “lost everything” yet said “I am so much better off physically, financially, mentally, and in almost every way.”

· Moreese Bickham – 37 years wrongly incarcerated yet said “I don’t have one minute’s regret. It was a glorious experience.”

· Harry Langerman – missed out on the first McDonald’s franchise yet said “I believe it turned out for the best.”

· Pete Best – dropped from the Beatles and yet said “I’m happier than I would have been with the Beatles.”

He ascribes this paradox to our “psychological immune system” which can generate “synthetic happiness” – “We synthesize happiness, but we think ‘happiness’ is a thing to be found.” Synthetic happiness seems like a fancy term for ‘positive mental attitude’ or simply choosing happiness even in the face troubles. He does go through a number of curious scientific experiments dissect how this happiness generation takes place which does underpin the lofty claims with some impressive empirical evidence.

My interpretation is that the Impact Bias is linked to the ‘Endowment Effect’.  In short, given two things, in this case ‘lives’ people will bias towards the one they have over the prospect of an alternative.