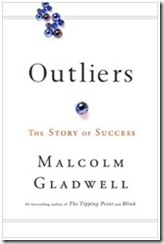 The tagline to Malcolm Gladwell’s latest best seller ‘Outliers’ is ‘The Story of Success’, but actually much of the work is devoted to the adversities of upbringing and the advantages people get.

“Do you see the consequences of the way we have chosen to think about success? Because we so profoundly personalise success, we miss opportunities to lift others onto the top rung. We make rules that frustrate achievement. We prematurely write off people as failures. We are too much in awe of those who success and far too dismissive of those who fail.”

Actually, he doesn’t really say that adversities ‘turn’ to advantage as much as he explores the advantages behind the appearance of adversities. He doesn’t deny the very apparent adversities that a number of his subjects – Bill Joy, Bill Gates, Joe Flom – endure, but he does provide a fresh perspective of the buried silver lining in the context of these compelling success stories.

“Think of how familiar [Joe Flom’s story] is to the stories of Bill Joy and Bill Gates. Both of them toiled away in a relatively obscure field without any great hopes for worldly success…Then the world changed and he was ready. He didn’t triumph over adversity. Instead, what started out as adversity ended up being an opportunity.”