What would happen if you removed civilization? It is a question as old as ‘what would happen when boy meets girl?’ Years of cinematic legacy feature the theme of “Removing Civilization”, and now life is imitating art as we are all living that movie. And with the time on our hands, we have lots of opportunity to explore this sub-genre.

“Removing Civilisation” is a genre that I am particularly fond of, and yet I can’t find much commentary describing it as a discrete theme. There are the three fundamental themes of conflict – Man vs. Man, Man vs. Nature, Man vs. Self. What I am referring to is probably dominated by Man vs. Nature, but there is plenty of Man vs. Self (especially in the solitary isolation instances), and even Man vs. Man (the “civilization” might be removed, but not the other “men”). Some writers have asserted that “Man vs. Society” is another type of conflict (which others counter is just a collective variant of the “Man vs. Man” theme), but this is the obverse. I am more referring to Man vs. Non-Society.

This theme is more of an uber-theme like “Romance”. While Romantic movies look at characteristics of connection, communication, and devotion, the “Un-Civilisation” movies explore resourcefulness and ingenuity. A failure of civilization, if you will.

What is the theme of the “Removing Civilisation” genre (or at least Civilization as we know it, as R.E.M. would say)? It’s not “Isolation” as sometimes other people are around. It’s not really “Self-Reliance” as it often does incorporate a small band of comrades. It’s more defined by what it lacks than by what it includes. And the thing that is removed is…Civilisation. All of these stories are about “how does man fare in an environment without the infrastructure and mores of civilisation”.

The venues these stories tend to be set in one of a few extreme and harsh environments:

The plot tends to revolve around two objectives: Survival, and Escape. And the challenges for both focus on two areas:

All stories seek to captivate with their audience through identification with the characters and their situations. Both are usually painted to extremes, but the fundamental components reflect daily challenges. Ultimately the viewer is forced to think to themselves, “What would I do?” What would I do if supplies were limited, where I could go was limited, who I could interact with was limited, what information was unchartered?

We are getting to live that movie now. 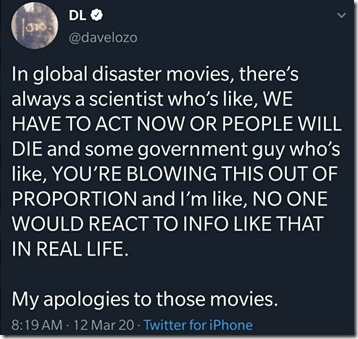